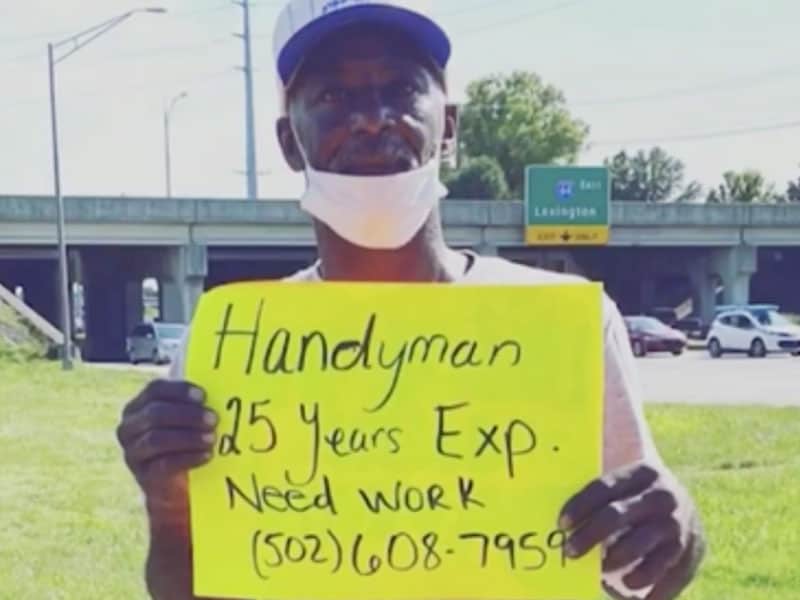 An unemployed Kentucky handyman who lost his job during the pandemic took a sign begging for a job opportunity to the streets. Then God sent a good Samaritan who went the extra mile to help him.

Robert Simpson works as a handyman most of his life around Louisville, Kentucky. He is a family man who could barely make ends meet to raise his family. Until when the pandemic hit, he could no longer sustain them and even lost his apartment. They then resorted to renting a motel room to have a place to stay temporarily. 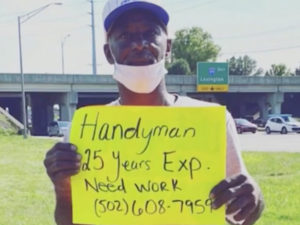 “We have to pay rent every day,” Robert explained, getting emotional. “And it costs $55 to $60 to stay there, and I’m running short on money.”

Realizing there weren’t enough funds anymore, Robert made a desperate yet noble move. Looking for work, he took to the streets with a sign that read: “Handyman, 25 years exp., Need work.” He didn’t ask for money; he was looking for a job.

“I just thought I’d go out there and see if I could find a job,” he said.

Hence, every day, he stood on the side of the highway with his sign despite the scorching weather. Robert never gave up until a week later, and God sent a good Samaritan.

Apparently, someone took a photo of him and shared his story on social media. That’s when Kyle Kark, the owner of Greenstar Home Remodeling, saw his picture. And soon after, he offered the unemployed handyman an opportunity.

“We just made the decision to have him come on,” he said. “I don’t know if we’ll have something for him all the time. But we’ll do what we can to help him get back on his feet.”

Robert accepted Kyle’s job offer without even asking about the compensation. And ever since, he had been doing great with his work.

“I started out as a painter, and then I became a landscaper – mechanical work, roofing – whatever I could make money at,” the handyman detailed.

Kyle went the extra mile in helping Robert. He picked him up for work and also bought groceries for his family. Moreover, he initiated a fundraising campaign for the hardworking handyman to help them.

“Rob is a humble man and has not once asked for a dime he has not earned,” Kyle wrote. “But he and his family are without essential needs, such as a vehicle and a permanent place to stay, so it is Green Star’s hope that you will join us in supporting our neighbor .”

Finally, after all the blessings he and his family received, Robert remarked, “That’s God’s work.”