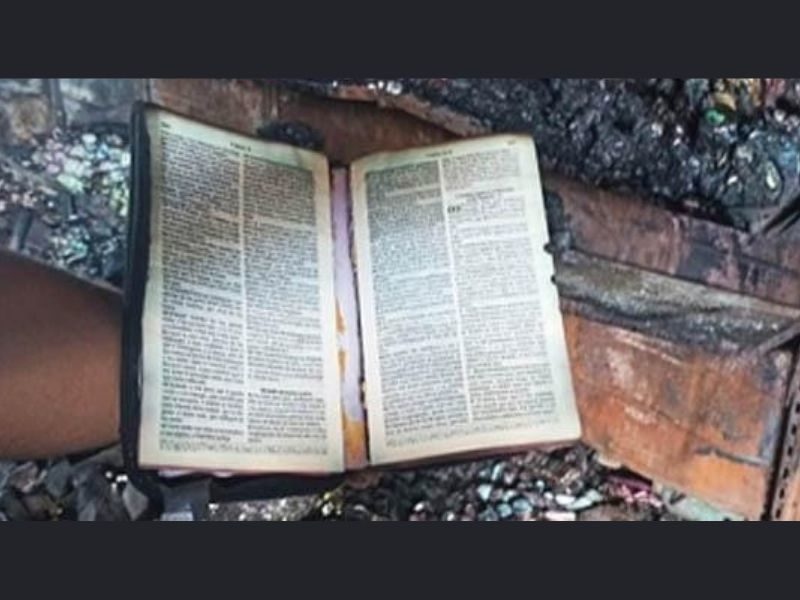 A tragedy struck a couple’s business in Brazil when a fire damaged their company’s warehouse. It burned for almost 12 hours and consumed the entire place. But, they were surprised and felt hopeful after finding a Bible still intact from the blaze.

Carmelia Vieira de Barros, and husband Raimundo, shared the incident on their social media page. It took them four days before they discovered the Bible because they believed everything had burned.

But, when two of their employees went to surveyed the area, it surprised everyone to see that a flammable object was left untouched by the flames.

“In the midst of the rubble, a thread of hope that shows us the light that will guide us,” they shared. “Yes! The Bible was found intact! Jesus the Savior.”

Despite the incident, Carmelia and her family held on to their faith in God. But the unharmed Bible had only given them more reason to believe in Him.

“I am very grateful to have found the Word of God intact inside our store,” she said in an interview.

“We have always believed, respected, and feared God. But, in the face of the trial we go through,” she continued. “Finding the Bible intact is a sign that God is on our side, and we have to get closer and closer to Him.”

Carmelia’s daughter, Rafaela, agreed with her mother. She said that the Bible only strengthened their relationship as a family and their faith in God.

She declared, “God is present in our lives.”

Furthermore, she boldly encouraged the viewers to “not lose faith.” “The message I have to leave is that we can never lose faith.”

For just $100 per month you can bring the gospel to 10,000 homes. Join us as media missionaries! GIVE NOW
VIEW COMMENTS
« Jesus Walks Into A Man’s Room And Shows Him Something Amazing American Idol Judge Luke Bryan Shouts ‘Thank You Jesus’ After Teen’s Audition »