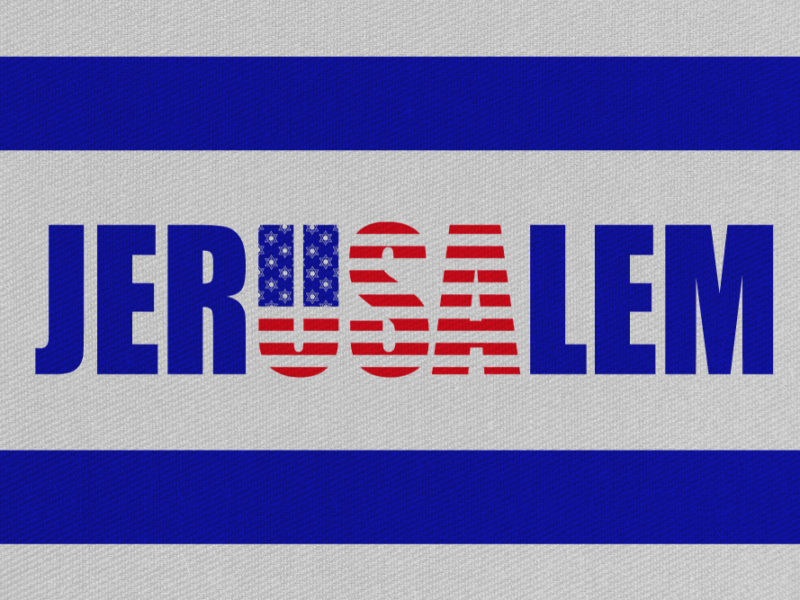 How appropriate that the letters USA appear in the name of Israel’s capital city. Following the Opening of the US Embassy in Jerusalem, it’s clear that the ties between America and Israel have never been closer. Unfortunately, not everyone is happy about this and sadly Israel’s Celebration of its 70th Anniversary was marred by the deaths of over 50 people. Despite this needless loss of life, there now seems to be a very real hope for an end to the hostility between Israelis and Palestinians.

Firstly let’s look at the close US/Israel connection, then let’s examine how the US Embassy in Jerusalem could be a catalyst for peace. If you watched the ceremony on the world’s news networks you would have been frustrated with them constantly interrupting to overlay or mute the event with the violent uprisings in Gaza. Today was a clear example of how biased CNN is especially in its anti-Trump rhetoric. Fortunately, I was able to watch the complete LIVE stream and am able to share a few highlights from the event from a Bible-believing perspective.

Welcoming the crowds at the Opening Ceremony, the US Ambassador to Israel, David Friedman, said this: “On this day and at this time 70 years ago the US was the first nation to recognise Israel. Now 70 years later, to the minute, we take the next step. A step voted upon, litigated and prayed for, for many years. Once again the US takes the lead.”

Though absent from the proceedings, the US President received several standing ovations. “So many have worked so hard to make this happen,” said the ambassador, “However today’s historic event is attributed to the vision, courage and moral clarity of President Donald J Trump, to whom we owe an enormous debt of gratitude.”

In addition to the many US dignitaries, attendees included the Israeli President and Prime Minister, Mayor of Jerusalem and Members of the Knesset. President Trump was represented by his daughter Ivanka and son-in-law Jared Kushner and sent a video message where he spoke of the ‘unbreakable spirit of the Jewish People’, his greatest hopes for peace and how he was extending a hand of friendship to both Israel and the Palestinians.

“On behalf of the 45th President of the USA we welcome you for the first time to the American Embassy in Israel in the capital, Jerusalem,” Ivanka said as she unveiled the Seal of the United States.

The President of Israel, Reuven Rivlin thanked President Trump and stressed that Israel would continue to safeguard Jerusalem as ‘a City of Peace’ for all religions, “One city, so greatly loved by everyone.”

Senior Adviser to the White House, Jared Kushner spoke of Israel as ‘one of the most vibrant nations in the world and applauded the nation’s commitment to human rights, women’s rights and freedom of religion.He spoke of America’s exit from the ‘dangerous, one-sided Iran Nuclear Deal’ and how Iran’s aggression threatens world peace. He also acknowledged the US Ambassador to the United Nations, Nikki Haley for creating a new day for Israel at the UN.

“Those who are provoking violence are part of the problem not part of the solution,” he said, “However it’s still possible for both the Israelis and the Palestinians to gain more than they give. Peace starts with a strong America recognising the truth,” he stressed. “Peace is within reach.”

A most touching part of Kushner’s speech was when he shared how he was the grandson of Holocaust survivors and he addressed the Holocaust survivors in the audience. “We cannot rectify the nightmare of your past, but we hope that today gives you some solace.”

“What a glorious day,” said Israeli Prime Minister Benjamin Netanyahu, “President Trump, by recognising history you are making history.”  He spoke in Hebrew about growing up in the neighbourhood and being in the line of fire, however the embassy of the most powerful nation on earth had now opened where he played as a boy.

“Jerusalem shall be called the City of Truth.”

He outlined Israel’s historic presence in the land and how the Balfour Declaration had made the rebirth of the modern Jewish nation possible. “Today is a great day for peace. Truth and peace are interconnected. Peace that is built on lies will crash. The truth is that Jerusalem has been and always will be the capital of the Jewish people. May the truth advance peace.” he said.

Then he quoted Zechariah 8:3 – “Thus says the Lord: ‘I will return to Zion,and dwell in the midst of Jerusalem. Jerusalem shall be called the City of Truth, the Mountain of the Lord of hosts, the Holy Mountain’.”

“May the opening of the US Embassy in Jerusalem share this truth far and wide. May the truth advance a lasting peace between Israel and her neighbours,” the Prime Minister concluded.

It’s sad that so many Palestinians died yesterday, violent protest is not the answer. The road to peace will not be easy but there is a glimpse of a new future on the horizon for the Middle East where people no longer feel they have to burn tyres, throw stones and put their children in harm’s way. Let’s continue to pray for the Peace of Jerusalem which includes both Arabs and Jews alike.

Israel, the lone torch of freedom in the Middle East

Finally, Pastor John Hagee, who can be seen on GOD TV regularly, delivered the Benediction. He referred to Israel as ‘the lone torch of freedom in the Middle East’ and spoke about how it prospers because of God’s love for the Jewish People… We consecrate the ground on which the United States embassy stands, reminding the dictators of the world that America and Israel are forever united. Let the word go forth from Jerusalem today that Israel lives.” You can watch the full benediction below.

For just $100 per month you can bring the gospel to 10,000 homes. Join us as media missionaries! GIVE NOW
VIEW COMMENTS
« WATCH: Carrie Underwood & Mike Fisher Credit Jesus for Successful Marriage What Was, Is Again—Trump, Truman, Truth »