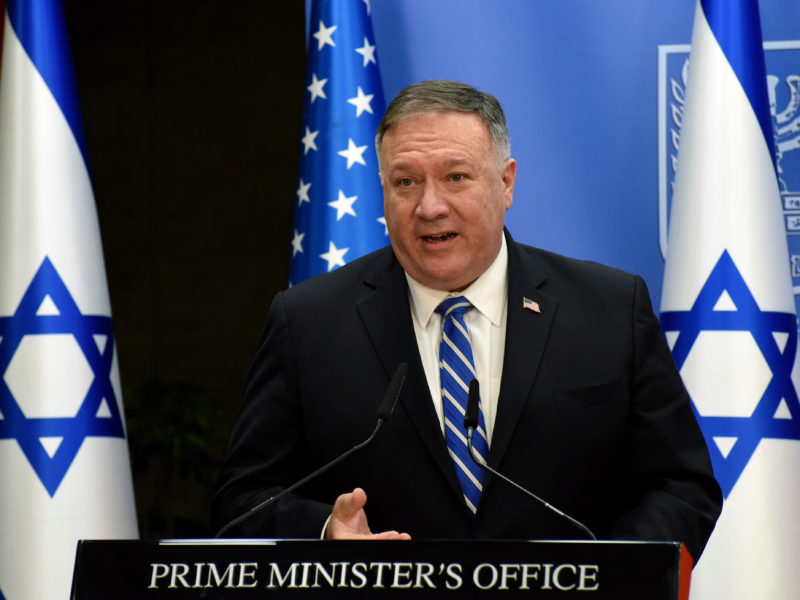 “Today I want to make one announcement with respect to a decision by the State Department that we will regard the global anti-Israel BDS campaign as anti-Semitic,” Pompeo stated Thursday during a joint press conference with Netanyahu.

“I know this may sound simple to you, Mr. Prime Minister, it seems like a statement of fact, but I want you to know that we will immediately take steps to identify organizations that engage in hateful BDS conduct and withdraw US government support for such groups. The time is right,” he added.

The US “wants to stand with all other nations that recognize the BDS movement for the cancer that it is. And we’re committed to combating it,” Pompeo underscored.

The BDS movement promotes financial, academic and cultural boycotts against Israel, ostensibly as a nonviolent struggle against the so-called “Israeli occupation.”

Critics say its activities are a modern form of anti-Semitism and that its true objective is to destroy the State of Israel, noting that it foments anti-Semitic violence, especially on US campuses.

About 30 US states have passed a bill prohibiting the state from contracting with companies that boycott Israel or are connected to BDS.

Eric Goldstein, acting Middle East and North Africa director at Human Rights Watch, stated that “instead of combatting systemic racism and far-right extremism in the United States, the Trump administration is undermining the common fight against the scourge of anti-Semitism by equating it with peaceful advocacy of boycotts.”

“Americans have a long history of supporting peaceful boycotts to promote social justice and human rights, like the civil rights boycotts in Mississippi or those against apartheid South Africa. The Trump administration has no business trying to tar groups because they back boycotts,” he claimed.

However, the Israeli NGO Monitor, a watchdog the tracks anti-Israel organizations, stated after Pompeo’s announcement that “equating of BDS with anti-Semitism echoes the International Holocaust Remembrance Alliance’s (IHRA) working definition of anti-Semitism, which defines attempts to deny ‘the Jewish people their right to self-determination’ and apply ‘double standards’ as anti-Semitic.”

“Combating anti-Semitism and ending the exploitation of universal human rights are both issues of great importance, and the need to address these objectives should transcend political divisions,” NGO Monitor said, calling on governments and NGOs to adopt the IHRA working definition of anti-Semitism.

For just $100 per month you can bring the gospel to 10,000 homes. Join us as media missionaries! GIVE NOW
VIEW COMMENTS
« 7 Reasons Why The Kingdom Will Advance Despite Who Becomes President Exposed: Iran’s Unit 840 Behind Attacks on Israel’s Border with Syria »