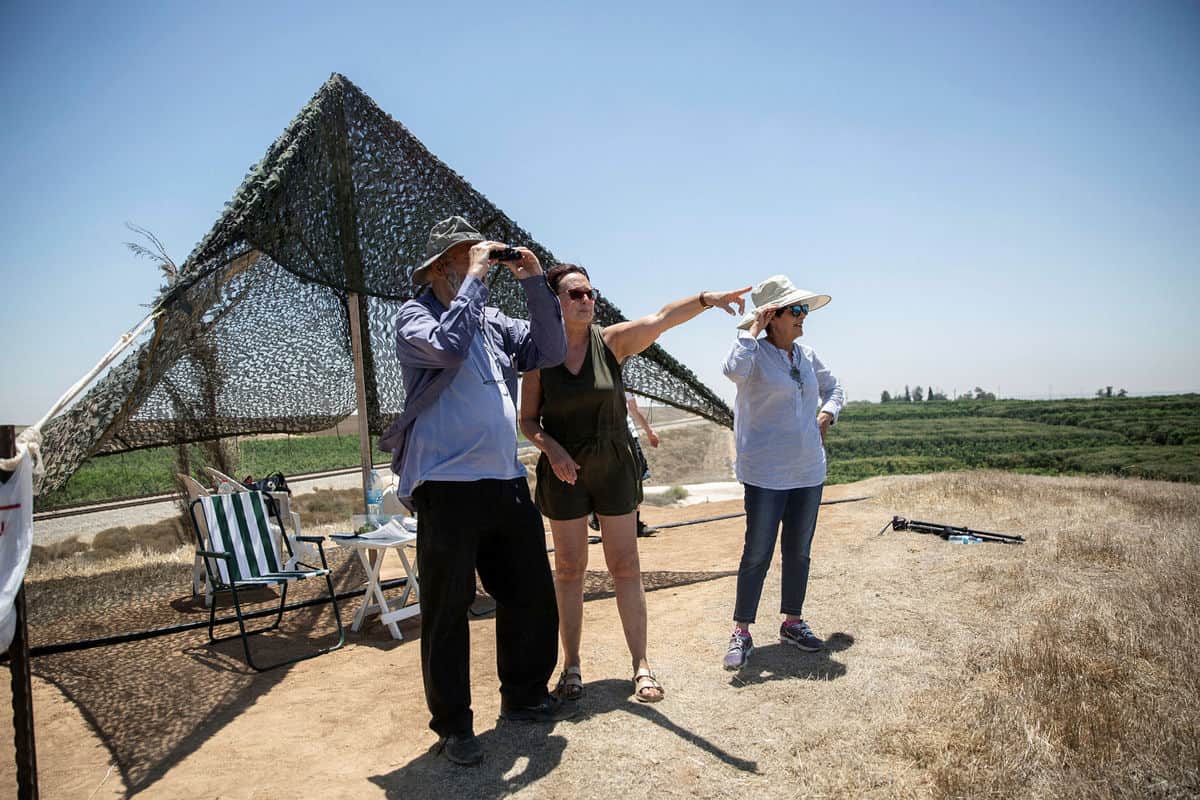 KIBBUTZ SAAD, GAZA BELT – Atop the bullet ridden facade of a two-storey building near Kibbutz Saad, where defenders held off the invading Egyptian army in 1948, Ma’ayan Ashba briefs a group of volunteers.

Standing under a shading net in the sizzling June heat armed with binoculars, a compass and maps, they  look out over the watermelon plantations into the distance for fires set off by incendiary balloons and kites launched from the Gaza Strip.

“We focus on the ground, in order to direct forces to the fires and prevent them from spreading, not on the kites and balloons as we don’t have the tools for that, ” Ashba tells the volunteers as they prepare for the afternoon shift at one of three look out posts manned by the HaShomer HaChadash (The New Guardians), an NGO that provides security and protection to remote agricultural communities. Other organizations such as the kibbutz movement man additional posts in the area.

“You’ll all be added to a Whatsapp group and when you see smoke rising, update the group so that fire engines and anyone else in the area who can help can get there as quickly as possible. We don’t know where it will hit, the balloons can land on the border and they can land several kilometers inside Israel,” continues Ashba.

Pointing to a map, Ashba explains to the volunteers how to pinpoint the general direction of a blaze. “Once they have a general direction, the smoke will lead them there,” says Ashba, herself a volunteer taking time off from her work from a government ministry to battle the blazes that have plagued the region over the past few weeks, setting thousands of acres of farmland on fire and causing millions of shekels in damages.

The fires are set by tying a piece of rope to a balloon or kite – although these have been replaced for the most part by helium filled condoms, which are transparent and more difficult to spot – carrying a small payload of a few pieces of charcoal in a wire basket. The bottom piece of charcoal is lit by the launch crew and as it rises into the sky and drifts over into Israel carried by the afternoon winds, it gradually burns through the rope drops to the ground and starts a fire when it hits wheat, or grasslands parched by the searing summer heat.

Pointing to a charred field, Ezekiel, a resident of the Sharon Plain north of Tel Aviv, says he came to volunteer in “solidarity with the residents of the south who suffer on a daily basis,” adding that he hopes the people of Gaza “will come to their senses and help create a different reality here in cooperation with Israel and create a prosperous Middle East.”

Doron Cohen, deputy to the CEO of Hashomer HaChadash says that the organization has brought in hundreds of volunteers of all ages and all political affiliations from around the country over the past month, helping to prevent at least 60 fires from spreading.

“They are saying by coming here ‘we are also responsible, we really want to help you.’ It is so supportive for the residents,” says Cohen, a former Jerusalemite who now lives on one of the kibbutzim in the area.

As we leave Saad and head toward one of the observation posts overlooking the Gaza border, a message comes up on the whatsapp group that smoke has been spotted rising south of the kibbutz. We double back and cut off the main road unto a dirt path where a white pickup truck with a water hydrant speeds past us kicking up a trail of dust and we know we are headed in the right direction.

We drive past a vast expanse of burned out fields where wheat crops have charred into darkened soil. But we have lost the trail of smoke, head back and then turn north as the pyre reappears. A field and some woodland is on fire, but the fire crews are already there – two fire engines, the pick up truck and a buggy – and the blaze is under control.

We watch as the crews douse out the remnants of the blaze along with a military reserve team that arrives carrying hand held hydrants.

Itzik Lugasi, the driver of the pick up truck, and a park ranger for the KKL – Jewish National Fund, tells us he was there within three minutes of the original message being posted. In that time, around half an acre of land has turned black.

“As you can see the damage is tremendous to forest and farmland and to animals,” says Lugasi as he stands before the blackened remains of what was only minutes earlier a field of dried out wild grass. “You have to get to the scene really quickly and with my pickup truck which carries 500 liters of water, I can get there first and contain the fire. The fire engines are a lot more powerful, but they are quick like I am and if we had to wait for them the fires would spread.”

It is a scenario that is repeated several times a day and sometimes dozens. Lugasi says the work is non stop from morning until night and he often has to deal with three or four fires a day with many times that number affecting the region as a whole.

“If things are quiet in my sector, then will go out and help with fires further south,” he adds.

From Saad, we head north to talk to a volunteer team from the kibbutz movement. Evening falls and things appear to have fallen quiet for the day,  but as we set back home, reports come in of a dozen balloons drifting over the border.

A few minutes later, the Whatsapp group comes alive as several fires are spotted in the fading light.

We are already headed back to Jerusalem, but on the Gaza border after a night of rocket fire and another day of blazes, residents pray for quiet.