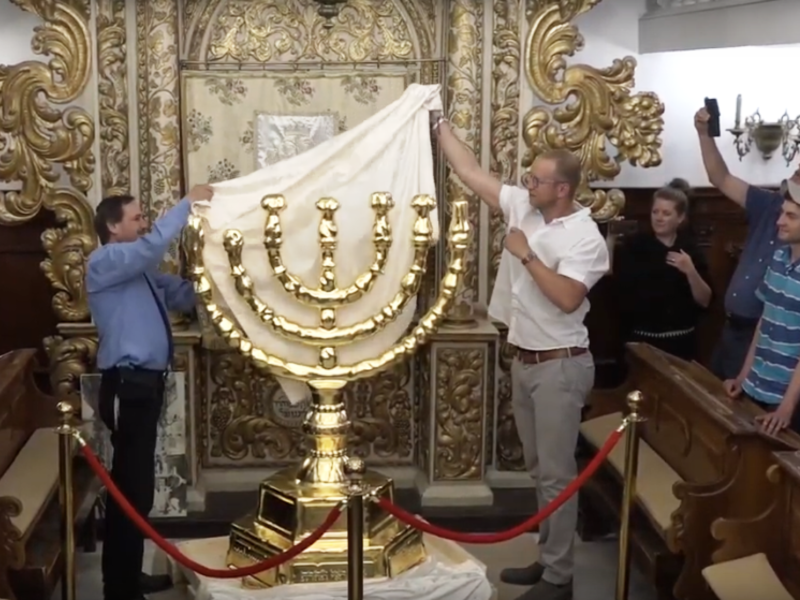 A group of Christians brought a 120-kg (265 pounds)  life-size menorah, which was symbolically restored from Titus’ Arch in Rome back to Jerusalem, the place of the Temple from which it was taken 2,000 years ago.

The Roman triumph parade after the destruction of Jerusalem’s Temple in 70 CE is documented on the Arch of Titus. The arch depicts Jewish slaves carrying some of the sacred temple artifacts, including the seven-branched menorah.

The menorah, a symbol of hope

Two years of work and €120,000 in private donations culminated in a moving ceremony that took place at Jerusalem’s Italian synagogue on Monday.

“We come honestly and with the few we have: A broken heart, and a broken, weathered menorah,” the Christian group said, noting that the project was a symbolic act of atonement for millennia of Christian persecution against the Jews.

“The menorah is a symbol of hope, that everything what was stolen from the Jewish people over years and years, will come back to them. And that God will gather the broken pieces that we bring,” the group stated.

For just $100 per month you can bring the gospel to 10,000 homes. Join us as media missionaries! GIVE NOW
VIEW COMMENTS
« On its 71st Independence Day, Israel’s Population Crosses 9 Million Mark Lauren Daigle Returns To American Idol To Share Her Wealth Of Experience With The Finalists »