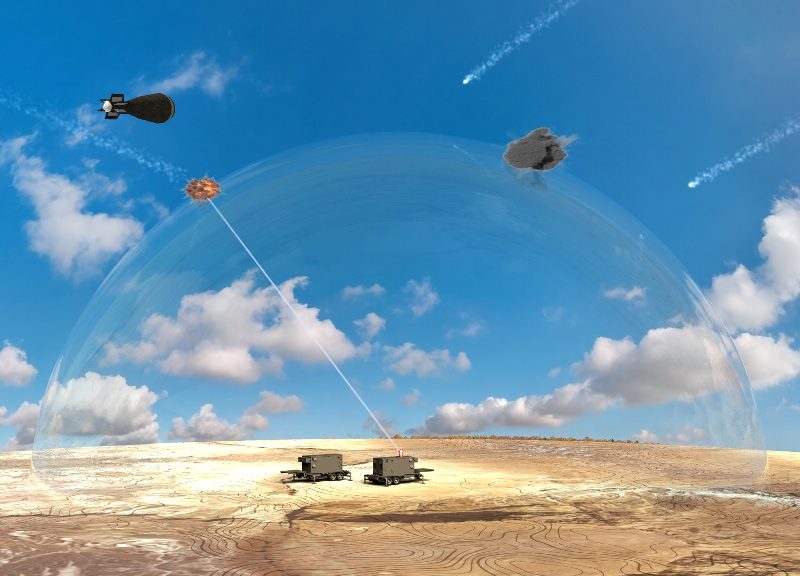 Israel’s Defense Ministry unveiled a technological “breakthrough” that will enable the development and deployment of powerful laser-based interception and defensive systems.

The technological breakthrough is based on the ability to fire off a laser beam accurately. Using the new technology, the new defense system has been able to target and stabilize the beam on long-range targets while overcoming atmospheric disturbances.

This technology enables the development of effective intercepting systems, with high operational efficiency, that will form another layer in the effort to protect the State of Israel by air, land and sea.

Following the breakthrough, the ministry has launched three powerful laser programs, in collaboration with the Israeli Raphael and Elbit Systems security industries.

The first element under development is a ground laser system which will be complementary to the Iron Dome defense system and will form an additional layer of protection from rocket, mortar and missile attacks.

Another element under development is a mobile vehicle-mounted unit for the protection of the maneuvering forces in the field.

The third unit under development is an airborne drone-based system that “intercepts above the clouds” and “protects larger spaces.”

The benefits of a laser interception system are the continuous and low-cost use, and improving the effectiveness of the protection systems as a result of using two different and complementary technologies – kinetic air defense such as the Iron Dome system and the laser.

Likewise, the laser enables smart interception management and the reduced usage of costly interceptors used by the Iron Dome and other systems.

Additionally, the laser interceptor is effective in intercepting other threats such as Unmanned Aerial Vehicles (UAV), drones and even accurate rockets in the future.

Over the years, the RDA has made great efforts in advancing powerful laser technology. Many developments, both from Israel and abroad, have been tested and proven to be ineffective. However, significant achievements have recently been achieved, as a result of a collaboration between the RDA and the Israeli defense industries and academics.

These achievements were made possible by the development of the electric laser, unlike the chemical laser they have used so far.

“We are entering a new era of ‘energy warfare’ in the air, land and sea. R&D investments made by the RDA in recent years places Israel among the leading countries in the field of laser power,” stated IDF Brigadier General Yaniv Rotem.

Israel over the years has developed a multi-layered defense system to contend with the ever-evolving ballistic projectile threat from Iran, the Gaza Strip and Hezbollah in Lebanon.

The defense system is based on four operational layers: the Iron Dome Defense System for close-range projectiles, David’s Sling Weapon System designed to contend with mid-range missiles, the Arrow-2, and the Arrow-3, for long-range missiles.

Minister of Defense Naftali Bennett stated that “the Israeli brain continues to lead with breakthrough innovations. The laser project will make the security system more deadly, more powerful and advanced.”

“This is a significant tier of strengthening the security of the State of Israel. Alongside the existing war tools, we will add a laser sword to face the threats, in the north and south,” he added.

“We are moving with full force, and the clear message is: Israel has great capabilities, defense and attack. It is better for the enemies of Israel not to test our patience and abilities,” he concluded ominously.

For just $10 per month you can bring the gospel to 1,000 homes. Join us as media missionaries! GIVE NOW
VIEW COMMENTS
« Court Orders Terrorists to Compensate Israeli Victims After Attacking Them with Fireworks Kanye West Brings Sunday Service On Awaken 2020 Among Other Christian Influencers »