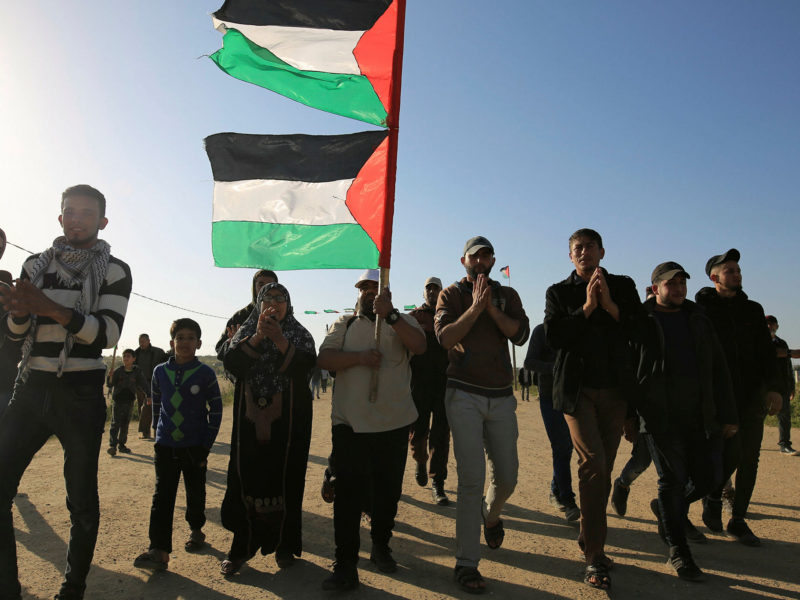 Hanan Ashrawi, a veteran Palestinian leader and a PLO Executive Committee member, has recently made the headlines following her organization’s connection to the planned tour in Israel of Democratic Congresswomen Ilhan Omar and Rashida Tlaib, which was blocked by the country following their support of boycotts on the Jewish state.

Ashrawi’s Miftah was behind the planning and itinerary of the tour, which included several events that would have served as a platform for anti-Israel activity.

Founded in 1998 by Ashrawi, Miftah seeks to “disseminate the Palestinian narrative,” “influence policy and legislation,” and “achieve a more supportive policy environment for reform and democratization in Palestine,” according to the organization’s description.

NGO Monitor, a watchdog that monitors organizations acting against Israel, has documented Mifath’s use of highly politicized language in its publications, accusing Israel of “massacres,” “apartheid,” “summary executions” of Palestinian youth, and “Judaizing” Jerusalem.

The organization also regularly lobbies the United Nations to “end the Israeli occupation and uphold accountability through international mechanisms.” It called for the removal of the security barrier, referring to it as an “Apartheid Wall” that creates “ghettos.”

Miftah has published articles that advocate for BDS (boycotts, divestment, and sanctions) actions against Israel, alleging  that “the BDS campaign calls for justice first, framing the conflict in terms of colonization, oppression and denial of the basic human rights of the Palestinian people.”

Ashrawi often depicts herself as a diplomat seeking peace in the Middle East, but a closer look at what she says in Arabic, and not in English, reveals her true set of values and beliefs.

TPS has gathered four extensive interviews Ashrwai has given throughout 2018 to Sky News in Arabic, Russia’s RT News in Arabic, to Palestine TV and to the United Nations Facebook page in Arabic.

While maintaining diplomatic language when addressing the public in English, when speaking in Arabic, Ashrawi regularly disparages President Donald Trump and Vice President Mike Pence, and said they have natural partners in Prime Minister Benjamin Netanyahu and former Guatemalan President Jimmy Morales, the extreme corrupt populists. These are “twitter leaders,” she said.

She has singled out Trump in particular, accusing him of failing as a leader and of multiple vices.

She told Palestine TV in March 2012 that Trump and Netanyahu base their foreign policy on decisions that will enable them to escape corruption and morality-related incidents.

Ashrawi has charged that Israel commits severe crimes including ethnic cleansing, planned massacres, execution of wounded Arabs, apartheid, racism and population displacements, all committed under the US’ auspices.

Speaking to Palestinian Broadcasting Corporation TV on March 12, 2018, Ashrawi alleged that Israel has formulated “a well-studied program for the ethnic cleansing of Jerusalem and for the expelling of the Palestinian residents, for the cancellation of their residency and for the ending of a Palestinian presence in Jerusalem while breaching international law human rights.

Later in the interview, she claimed that the Trump administration has lent support to Israel’s plan for Jerusalem by recognizing it as Israel’s capital, and that Trump gives Netanyahu complete freedom to act, and therefore, an international court on ethnic cleansing should be petitioned on the matter.

She then raised the issue of the “executions.”

“Israel employs this method in breach of the international law,” she charged. “We are certain that executions take place in the field and we have evidence for this.”

“Israel executes residents and wounded people in the field. There is one incident in which a wounded person was dragged until he died, and Israeli officials repeatedly say that they do not want to see anyone emerge alive from clashes,” she said.

She further stated that “Israel is implementing Apartheid, but it is worse than that: Israel is ejecting the Palestinian people together with its culture and characteristics and is replacing it with another nation.”

Ashrawi has admitted to intervening in inner US politics and has openly called on the Democratic Party to replace Trump’s failing administration.

She told Sky News in Arabic in September 2018 that she maintains contact with political elements inside “America’s backyard” with the objective of setting public opinion against Trump’s administration.

She has stated that the US is a war criminal and should be tried at the International Crimes Court (ICC).

She has repeatedly said that the US has declared war on the Palestinians while using the weapon of hunger, and that it breaches international conventions and moral guidelines.

She has blamed the US of looting and starving the Palestinians and said it should be probed by an international tribunal, as “the US is complicit with the occupation, breaks international laws and acts against social norms.”

In an interview from Moscow with RT News in Arabic, she said that “there was no escaping bringing the Americans to international law and the Palestinians are determined to do so because the US is part of the occupation and breaks the law.”

According to Ashrawi, many countries and international bodies support this Palestinian policy.

Ahsrawi blamed the US that it assaults and harms conventions and norms and essentially acts against the world and displays “hostile thinking” toward international law.

She accused the US of “declaring a financial, diplomatic and legal attack on the Palestinians and therefore is an accomplice to crimes.” She suggested that the Palestinians turn to China or Russia to act against the US.

She claims that there are many shared points between the Palestinians, the Chinese and the Russians and this should be used to mobilize international opinion against the US.

She accused Trump and his administration of realizing the old Zionist vision and said that it is comprised of an extreme group that is supported by the Zionist lobby and enjoys Zionist funds which was put at Trump’s disposal, essentially parroting classic anti-Semitic tropes.

Congress has repeatedly caved into the demands of the Zionist lobby in the US, she alleged.

She has said time and again that Trump is surrounded “by an extreme right team which advises him to act against social conventions.”

She charged Trump of “acting to eliminate the refugee problem and ignores international decisions and therefore has cut funds to UNRWA” only because he is fed by his friend Netanyahu and it is he who influences his diplomatic decisions on issues such as UNRWA.

“Kushner, Greenblatt, and the most extreme, Friedman,” are part of this. She told the anchorwoman that “one should read Bernie Sanders” to understand how extreme the group is.

“These three are acting in the service of the violent racist Zionist vision. These three represent the settlers, are ignorant and lack respect,” she charged. All three are Jews.

Commenting on the Palestinian Authority’s ties with Washington, she told Palestine TV that there was no reason for meetings between the two sides, because of Trump and “his teams of extremists.”

Relating specifically to David Friedman, the US’ Ambassador to Israel, she said he is the “most right-wing, Zionist, racist extremist, spokesman” and the best Israel could have wished for. “A person who cannot iterate the word occupation,” she said.

While conceding the Palestinians could not declare war on the US, she said they were active in turning world opinion against the Trump administration.

It is of significance to note that in May, Ashrawi’s application for a US visa was rejected.

For just $100 per month you can bring the gospel to 10,000 homes. Join us as media missionaries! GIVE NOW
VIEW COMMENTS
« Following Months of Legal Appeals – April Election Results May Change Israeli Aid Arrives in Bahamas in Wake of Hurricane Dorian »