When an Israeli Soldier Dies in Battle… the Country Stops 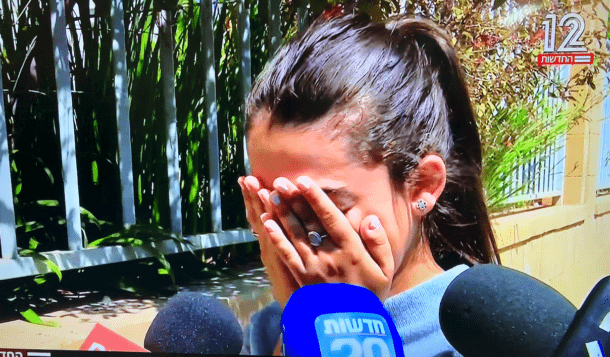 Last Friday, during the ‘peaceful’ border protests in Gaza, Israeli Soldier Aviv Levi was gunned down by a Hamas sniper. At 21-years-of-age, his life was over. I want to help you feel the pain that we feel, here in Israel, when a soldier dies in battle.

Unlike in the USA, where I come from, from the time you can speak, you know that one day you will serve in the Israeli Defense Forces – and you are proud of that. Most young men want to serve in a combat unit—we call that, kravi.

Israeli men serve three years, and the women serve two. It is pounded into your psyche your whole life that one day you will serve. It is an honor. Beginning in your junior year of high school, you start filling out the forms, going to special meetings and preparing yourself mentally for the army. For those who seek to be in an elite unit, they take special courses during their senior year. I see them jogging with backpacks on the beach. Young people, 17-years-old, getting in the best shape of their lives.

In most armies, the commanders stand back and command their soldiers: “Forward!” In the Israeli Army, the most legendary phrase is “Acharai” or “Follow me.” Israeli commanders lead the way into the battle.

In 1948, a solider was shot in the eye during the War of Independence. As he lay on the ground dying, he heard over the radio, “We are coming!”

Twenty-three men under the command of Nahum Arieli arrived on the scene, and platoon commander Shimon Alfassi yelled, while under fire: “Privates retreat! Commanders cover them!” —Times of Israel

Many of those commanders died that day, and many believe that was the day the ‘Acharai’ principle was birthed. Soldiers know that their commanders are willing to die for them. And these bonds last forever in a small country, where you maintain contact the rest of your life.

They are all our sons and daughters

Every one of my daughters’ friends went into the army. Our soldiers are not people we don’t know, going to a foreign country, but they are our children who come home for Shabbat dinner and, then, sleep until 4:00 pm on Saturday!  They go out with their friends, only to lug a massive backpack to the train or bus station Sunday morning, heading back to base.

My daughter went to school with Nissim Sean Carmeli. They had something in common, both being American immigrants, and were friends. On July 19, he was killed in the 2014 war in Gaza, during a shootout. There had been concerns that the lone soldier, who split his time between Israel and South Padre Island, Texas, where his Israeli parents live, wouldn’t have enough people paying their final respects at his funeral.

But, since he was a huge fan of Maccabi Haifa, the soccer team posted a photo of Carmeli on its Facebook page after his death, asking fans to go so that his funeral wouldn’t be deserted. —Times of Israel. The Soccer team provided two buses to bring people home from the funeral. However, 20,000 Israelis showed up to honor him. Someone wrote a song about him:

In most countries, you go off to war. In this country, you travel an hour and a half south or north to go to war. Gaza is an hour from my apartment in Tel Aviv. During the 2014 conflict, after the first Israeli soldiers died, Israeli citizens poured into the south to support the Israeli Defense Forces (IDF). I will never forget going to visit my daughter at her base near Gaza and seeing rockets flying over my head.

My niece hands out popsicles to soldiers

One farm had been turned overnight into a R&R station for weary IDF soldiers with massages, hamburgers, salads, ice cream, haircuts and more. I walked around, amazed at the hundreds of non-soldiers who had come down to serve. On another occasion, my wife Elana and I (along with some others) went all the way to the front lines to hand out coffee, underwear and sweets. We went from tank to tank, blessing these young men.

In the midst of the Gaza 2014 war, a family visits their son near the frontlines.

Elana with soldiers on the Gaza border in 2009.

Israel has earned the nickname The Start-Up Nation, with more start-ups per capita than any other nation. In their book by the same name, Dan Senor and Saul Singer show how the IDF is the best training for entrepreneurship. IDF soldiers understand what it means not to give up.

How has such a young nation that is 15 times its original population, taking in immigrants from all over the world, host one of the most stable and profitable economies in the world? In 2009 Israel had 63 companies on Nasdaq, more than any other foreign country. Senor and Singer would tell you it’s the IDF.

IDF soldiers “have minimal guidance from the top, and are expected to improvise, even if this means breaking some rules. If you’re a junior officer, you call your higher-ups by their first names, and if you see them doing something wrong, you say so.” Neither ranks nor ages matter much “when taxi drivers can command millionaires and 23-year-olds can train their uncles.” —Wikipedia

So last night, it was a familiar sight to see a bereaved girlfriend on the news as you see in the main photo above. She wrote this: “My dearest love, my fighter. The heart burns and the tears don’t stop. Who would have thought you’d be gone so quickly? My Aviv, I refuse to believe this is real. I refuse to believe you are gone.”

His friend spoke of their planned trip to South Africa after their army service. Seeing his friends on TV was something I’ve seen many times, speaking about him, talking about what he loved, what a great friend he was and how he never backed down from a challenge.

His father eulogised: “You were a ray of light for us, glowing and smiling. We loved to watch you grow into the man you became. You were the salt of the earth and paid the highest price because you excelled. You did not evade any task, big or small. You watched over your friends. We are not parting from you — you will be with us forever.”