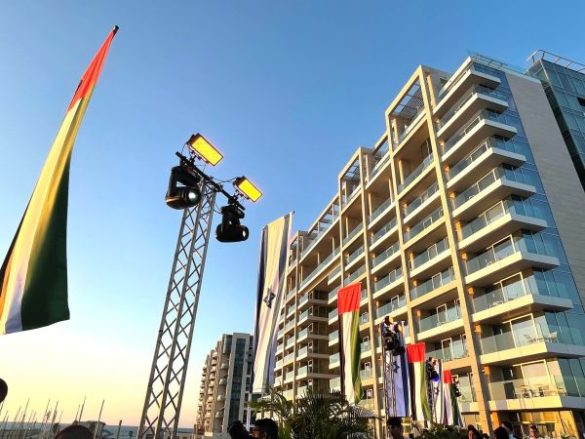 The main guest of honor was His Highness Sheikh Abdullah bin Zayed Al Nahyan, the UAE’s Minister of Foreign Affairs and International Cooperation.

Sheikh Abdullah is also the younger brother of UAE President Mohammed bin Zayed – widely known by his initials, “MBZ” – and the son of the late-Sheikh Zayed, the founder of the modern independent Emirati nation.

While most of the night was focused on the increasingly warm relationship between Israel and the UAE, Herzog used the occasion to make news regarding another signer of the Accords.

“I intend to visit Bahrain in the coming months as the guest of His Majesty King Hamad bin Isa Al Khalifa in order to continue exploring together new ways to enhance our nations’ cooperation, for the sake of the peace, prosperity, and success of our entire region,” Herzog told the guest to a big round of applause.

I was honored to be invited to attend the beautiful event, and found myself profoundly grateful to the Lord for His miraculous and prophetic answers to the prayers of millions of Evangelical Christians – prayers over many decades – that He would expand the circle of peace between Israel and her Arab neighbors.

True, evil is rising in Iran, and in a growing alliance between Russia and Iran.

But even as we pray about those disturbing developments, let’s not lose sight – or seem ungrateful for – the wonderful miracles God is doing in the Middle East right now.

Below is the text of President Herzog’s full speech, which I found intriguing and very encouraging:

The signing of the Abraham Accords in September 2020 was a very moving occasion. It was moving because of the great potential that we wished to see in the accords, and because of the vision we were praying for, for the State of Israel and for all nations in the region. Witnessing that moment of historic importance, we hoped and prayed that this moment would provide us a path to the future to which we aspire: a future of partnership and prosperity, of renewal and peace.

Two years later, what began as a wish and as an aspiration uniting us all is now an established fact: ladies and gentlemen, the Abraham Accords transformed, and continue to transform, our region beyond recognition! This is therefore the heart of tonight’s celebrations. Over the past two years, we have seen how much power is latent in an openness to change, in good neighborliness, and in unmediated interactions between people. We have seen how a bold partnership may form the basis for sincere change, even when we do not agree on everything.

The Abraham Accords heralded the return of hope, of dramatic regional change, of a horizon of cooperation and prosperity, of a future that draws its power from the togetherness created in the present. Following on from the peace accords with our dear longtime partners, first Egypt and then Jordan, who were the first to sign peace agreements with us. The peace agreements with these countries remain trailblazers. Similarly, the Abraham Accords proved above all else how the courage of leaders and nations can open a window to a world that had previously seemed unattainable, and how much space there is for momentum and growth when we choose to change paradigms and learn about each other. On behalf of us all, I hope that we shall see more and more groundbreaking accords, including with our close neighbors, the Palestinians, and that the historic process, gaining unimaginable momentum, of Israel’s integration into this region will continue, layer upon layer.

Distinguished audience, nearly eight months have passed since my moving and historic visit to the United Arab Emirates as a guest of the President, and then-Crown Prince, Sheikh Mohammed bin Zayed. I recall the warm reception, the playing of the national anthem, Hatikvah, at the palace in Abu Dhabi, which plucked heartstrings; I recall my visit to the stunning Expo in Dubai; and mostly, I recall the true friend I was privileged to meet and draw great inspiration from him: His Highness Sheikh Mohammed bin Zayed, the President of the United Arab Emirates and Ruler of Abu Dhabi.

We met again four months later, when I arrived to express condolences to the Sheikh on the death of his brother—your brother—the late Sheikh Khalifa bin Zayed. Even in his deepest grief, and in every conversation we have, I find a stalwart leader with his sights set forward, for the sake of his nation’s good, for the sake of the future of our region and the whole world. Sheikh Mohammed bin Zayed’s impressive leadership, and his boldness in looking far ahead—these are shaping history. I would like to convey through you, Your Highness, Sheikh Abdullah bin Zayed, the Israeli people’s wishes to your dear leader, your beloved brother. and of course to Your Excellency. And of course, I welcome you, Your Highness, as a central actor in these accords, who actively led the way to them and signed them. You, my friend, are a man of peace.

Tonight, I wish to note and salute the significant contributions to the Abraham Accords of former Prime Minister Benjamin Netanyahu and former U.S. President Donald Trump.

I also want to give a special thanks to special presidential advisor Jared Kushner, and to his team, headed by Avi Berkowitz, who is here with us today, and to everyone who worked on these accords.

My sincere appreciation to the King of Bahrain, Hamad bin Isa al Khalifa, and to King Mohammed VI of Morocco, who are represented here with pride by their ambassadors.

So many partners have contributed their share to the reconnection between the children of Abraham, living in Israel and the United Arab Emirates, in Bahrain and in Morocco.

Of course, I wish to note my positive conversations this past year with the leaders of the government of Sudan, reflecting, I believe, a mutual desire to continue deepening relations between our countries.

All Israeli governments have a commitment to this dramatic transformation and to these accords, and the Israeli people salute our new friends with a joyous and open heart.

It is clear that Israel’s integration in the region, the direction in which history is leading, is bringing down barriers, erasing cynicism and doubt, and making room for creativity and life. Look at the broadscale cooperation that you mentioned, our friend, in so many fields.

Look at the scope of trade and tourism between our nations, which continue to break records, and which will yet soar further after the free trade agreement between Israel and the UAE enters into effect.

Look at the exciting leap in cooperative ventures between Israel and Morocco, two states and two nations with a shared history stretching back years.

Economic ties between Israel and Bahrain are also expanding in impressive ways.

I intend to visit Bahrain in the coming months as the guest of His Majesty King Hamad bin Isa Al Khalifa in order to continue exploring together new ways to enhance our nations’ cooperation, for the sake of the peace, prosperity, and success of our entire region.

We all have a duty, which is also a great privilege, to continue doing everything to exhaust the fruits of these important accords, out of faith and in the hope of bringing more states and nations to join the blessing of the children of Abraham, and to expand the circle of peace with Israel. Together we offer a prayer, a prayer shared by all children of Abraham, members of all religions and faiths in the Middle East, that the years to come may be marked by tremendous hope: for our empowering common endeavors, for interfaith harmony, and most of all, for the building of new bridges between us.

We are all destined to be neighbors, to live together in the Middle East side by side, Jews next to Muslims next to Christians next to members of all other faiths.

We must insist on choosing our common good, in choosing life, for our sake and for our children’s and descendants’ sake.

As we read in the Quran: ‘We have made you into peoples and tribes so that you may get to know one another’ (Sura 49:13), and in the spirit of the call from the Forum for Promoting Peace in Muslim Societies: ‘Our call is a call for peace, a call for love and fraternity, a call for human dignity, exalting humanity in every place.’

As we read in Judaism’s ancient texts: ‘Peace unto you and to your household and to all that is yours, peace!’ (1 Samuel 25:6)

A sweet and happy new year to all!