BREAKING
Lay Aside The Old Self
Ben And Jerry’s Staying In Israel, But Founders Aren’t Doing The “Chunky...
Israel Has a New Prime Minister
Home Articles What’s God up to? Isn’t it time for pain and suffering to end?

What’s God up to? Isn’t it time for pain and suffering to end? 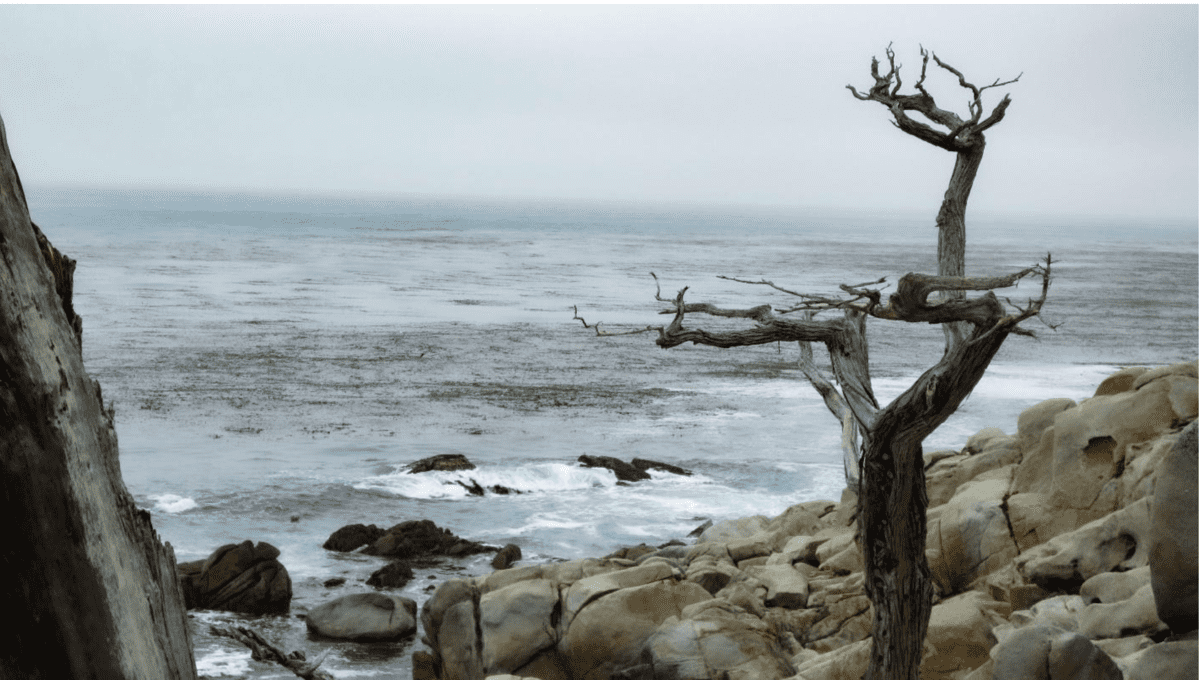 A battered tree lives a lonely life on the California coast. Much like a bruised and broken person, this tree has endured too much. What’s God up to? Isn’t it time for the pain and suffering to end?

There’s another tree in our yard, that we planted a few years back. My wife received it when we took a Christmas tree to the city for mulching. When Sheila first received the tree, it was small. Just an unassuming sapling – full of hope for the future. A Monterrey Oak, bursting with potential.

We planted it in a pot on the back porch. Our little porch overlooked a forest of fully-grown cedars. We enjoyed watching the tree grow. It had some sun. It got watered along with the other plants. And, it grew.

But, you see, it grew into a funny shape. It took a considerable left turn in its growth – growing toward the sun and not getting turned by a good gardener, working to ensure even growth.

A squirrel broke one branch, ensuring a lop-sided pattern in its future growth. The little tree went through a lot in a few short years. You could say it had a hard start in its young life.

When we moved, we re-planted the oak tree into the yard in full sun. The sapling grew, but it maintained its dog-legged appearance, bearing the scars of a harsh beginning.

The tree was our little haphazard symbol of life. You see, life is not a box of chocolates or a bowl of cherries. Sometimes life is, quite simply, hard. Life doesn’t always deal you what you expect or even what you want. It’s just difficult.

Sure, in life we get glimpses of Heaven. We get an idea of what to expect in glory. We get mountaintop experiences – and we also get the valley of the shadow of death.

We get clouds with silver linings – and we also get tornadoes and hurricanes taking lives lived too little.

We get children dying, cancer growing, and drunk driving. It’s a lot to bear.

Paul, an apostle of Jesus, tells us, “We are hard pressed on every side, but not crushed; perplexed, but not in despair; persecuted, but not abandoned; struck down, but not destroyed.” (2 Corinthians 4:8-9)

Even the popular 90’s band Chumbawamba sings, “I get knocked down, but I get up again. You’re never gonna keep me down.”

I’m here to tell you, God never intended life to be this way. Jesus tells us, “The thief comes only to steal and kill and destroy. I came that they may have life and have it abundantly.” (John 10:10)

God is not out to punish the wicked. He is a doctor for the sick. He’s not out to condemn the sinner. He’s here to pay the price for the one who can’t afford the fine. He’s not here to force people into religion, or else. He’s here as a friend of the sinner, to lead them to safety and a hope for the future.

Jesus encourages us, despite our worldly struggles. He says, “I have said these things to you, that in Me you may have peace. In the world you will have tribulation. But take heart; I have overcome the world.”
(John 16:33)

Jesus has overcome the world. What does that get us? Why is the world still such a messed-up place? People are hurt and broken because of sin. The world is a bad place because of sin – mine, yours, everyone’s sin.

Jesus came as God in the form of one of us. He lived a sinless life and died to pay the price for all sin. He did this to “overcome the world.” He did this to fix everything broken with the world – everyone’s pain. Jesus rose to life again to conquer death and show us the way to freedom. He remains with His followers, living inside of each one.

Paul, tells us, “For our sake he made him [Jesus] to be sin who knew no sin, so that in him we might become the righteousness of God.” (2 Corinthians 5:21)

So, Jesus is with us and in us. His Kingdom is now – yet we still struggle. The war is won, but the battle is still raging. Our pain and suffering are brief. In the grand plan, we suffer just a moment. To us, it feels like a lifetime. No joking, right? It’s nothing to trivialize.

Why we go through pain and suffering

My brother’s pain hurts him 24/7. He can’t seem to get any relief. It’s not his fault. What’s God trying to teach him anyway?

My mother is wracked with grief and pain after losing my father. 54 years together, and now she must navigate life alone.

I know people who have lost children too young. I know people who are in agony with every step they take. I know people who never seem to stop suffering. Misery lines up in a long queue, hitting them with blow after blow, leaving them struggling to catch a breath, much less lift their head with dignity. What’s God up to? Isn’t it time for the pain and suffering to stop?

I don’t have the answers. I don’t know why the world is in such a state. I don’t even know why God allows it to continue. Here’s what I have learned. Take my opinion for what it is and ask God about it one day when you see Him face-to-face.

God is repairing the evil that is loose in the world. Yes, He’s won the war. But, He is routing out the enemy. He’s storming foxholes and blowing up bunkers.

He’s repairing this world and calling His righteous people to Himself. All of this is work He’s doing in the spiritual realm to finish His Kingdom and bring His people together.

Scripture tells us, “For the eyes of the Lord range throughout the earth to strengthen those whose hearts are fully committed to Him.” (2 Chronicles 16:9)

God’s people have to go through the trials of this earth while we live here. My friend, John Burke, is the pastor of Gateway Church in Austin, Texas. He also wrote Imagine Heaven, a New York Times bestseller. John puts it this way,

“Heaven is our home. This life is a birth canal we’re going through. It’s painful and difficult but just like childbirth, it ends with new life and a joy inexpressible. Paul’s letter to the Romans doesn’t say God cursed humanity, it says God cursed the creation with death and decay. According to the 2nd Law of Thermodynamics, everything rots, rusts, decays, gets destroyed, and there is disease and death, but God leaves it for a time with a bigger story in mind.”

And, the passage in Romans he references says, “For we know that the whole creation has been groaning together in the pains of childbirth until now. And not only the creation, but we ourselves, who have the firstfruits of the Spirit, groan inwardly as we wait eagerly for adoption as sons, the redemption of our bodies.” (Romans 8:22-23)

Also read: Making Sense of Suffering – How to deal with ‘Gethsemane Seasons’