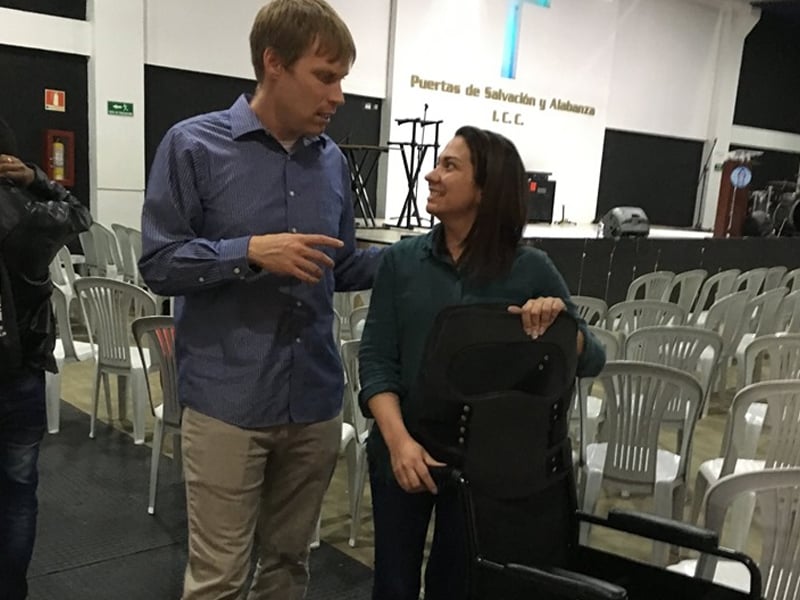 After being prayer over a woman in a wheelchair receives healing and walks out of the church on her own.

Paul Rapley is a minister is a 14-year cancer survivor and a graduate of Bethel’s School of Ministry in Redding California. He is featured in the “Christ In You” movies and travels around the world sharing his passion for healing. For that reason Paul shared a powerful experience about a miracle healing of a woman in a wheelchair last Sunday on Facebook.

“He has a tremendous passion to have the body of Christ empowered to minister healing as well as other gifts of the Spirit,” says Paul’s website.

On October 27, as Paul was finishing up a Sunday Service in Bogota, Colombia, he saw two people leaving in wheelchairs. He stopped the girl in the second wheelchair and asked if he could pray for her. She gladly said yes.

It turned out that the woman had cancer for seven years and it had spread from her breast to her spine.

“She is in a brace and has had cancer for 7 years. It has spread from her breast to her spine causing her a lot of pain and problems,” Paul wrote.

As Paul prayed for the woman something began to happen.

“After two prayers, the brace is off, she is out of the wheelchair. The pain is gone, and she feels perfect,” he added.

As a cancer survivor he understands the struggle and the pain and for that reason Paul rejoiced.

Because of Paul’s obedience and faith a woman is healed. What miracles can you do with similar faith?

For just $100 per month you can bring the gospel to 10,000 homes. Join us as media missionaries! GIVE NOW
VIEW COMMENTS
« Houston Texans Quarterback Deshaun Watson Baptized In The Jordan River UFC Fight Winner Declares On National TV: “My Crown Comes From My Lord And Savior Jesus Christ” »