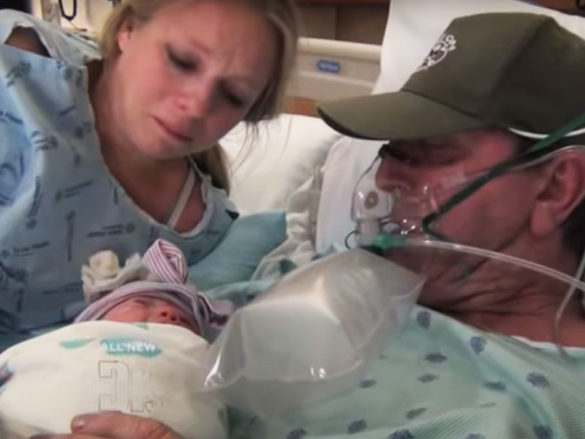 A woman went into labor 15 days early so her husband with terminal cancer could still meet his precious baby girl.

In 2012, the Aulger family, in Texas, had a bittersweet experience that Diane Aulger remembers well. 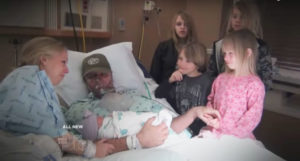 Diane’s husband, Mark, had terminal cancer. He suffered through eight-months of chemotherapy and doctors declared him cancer-free. However,  they found out that the chemo treatment had destroyed his lungs. He was then diagnosed with pulmonary fibrosis. It is a “condition that causes severe scarring and thickening of the lungs.” The condition developed during his cancer treatment.

“We thought he could get on steroid treatment and oxygen and live for years,” Diane told ABC News in an interview.

Then she added, “He thought he’d be coming home in a few days with an oxygen tank.”

While Mark was battling with cancer, Diane was pregnant with their fifth child. Sadly, a month before the baby was due, doctors informed him Mark had only a week left to live. That meant he wouldn’t be able to meet his baby girl. Thus, Diane requested to be induced into labor. 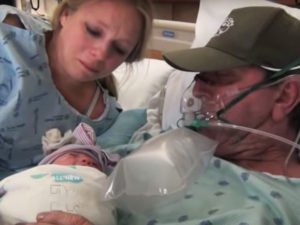 Diane planned for a natural birth. However, she wanted Mark to meet their baby girl before he passed away. She courageously gave birth two weeks early. Thankfully, she delivered a healthy child, Savannah, on January 18. Shortly after, Mark was able to hold his baby girl.

“Our beds were side by side,” Diane recounted. “The day she was born his oxygen levels were really high. He held her for 45 minutes. Him and I just cried that whole time.”

Then five days later, on January 23, Mark passed away.

“The kids go on as if dad is really still here,” the wife told ABC News. “Mark was a very funny guy. My kids still tell jokes how they would when he was around. He would have been a wonderful daddy to Savannah.”

The Women Who Induced Labor, Diane Aulger, Visits THE DOCTORS To Discuss Her Story