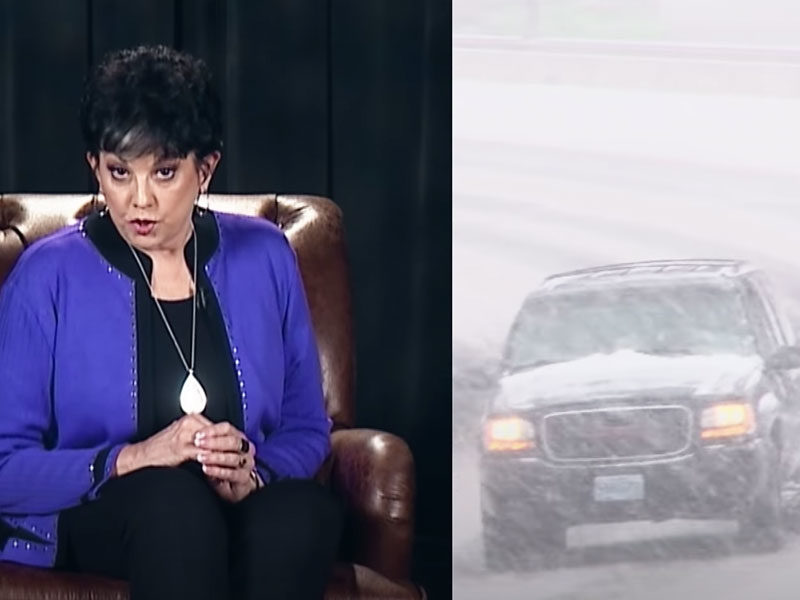 A woman who drove amidst a huge snowstorm picked up a man who was hiking amidst the storm. She never knew it was an angel until he suddenly disappeared before her eyes.

Linda Markowitz’s daughter Michelle faced some legal issues in Albany, New York. Because of it, she was sent to juvenile detention. And the mother was only allowed to visit for a short period of time on weekends. So, she took that opportunity and visited her daughter weekly.

Meeting A Stranger On The Road

One weekend, a huge snowstorm hit New York. Although that was the case, Linda decided to still drive 2 hours just to visit her daughter.

While on the way, the snowstorm almost obstructed the way. But she was determined to go anyway. The snow almost covered the road. Other cars couldn’t make it any further, but she was still moving.

Later on, she saw a man ahead of her walking in the midst of the blinding storm. Linda felt compassion towards the man. So, she stopped and offered to help him. She then gave the stranger a ride.

When the man went inside the passenger’s seat, Linda was surprised.

Scrappy Looking Man Or An Angel?

“His feet were blue! He was really cold! He didn’t have a decent jacket on. And he looked a little scrappy, his hair was a little long, blonde,” she recalled.

She described him as a “scrappy looking, sort of military-looking guy.” Then she added, “he was not particularly handsome. He wasn’t big and huge, he looked like a normal man. But he had a countenance about him that was so attractive. It was so inviting. His voice was like soothing water. He was very gentle spoken, very kind.”

Linda continued driving on the road and the man told her “he’s in the service.” He said he just finished an assignment in Hawaii and was going to Boston for a new assignment.

An Astounding Message From The Hitchhiker

And on the way to their destination, the man told her about fascinating things.

“He told me that there were things that were gonna come in my life that would be interesting and difficult,” Linda said. She was a little taken aback because she never even knew the man.

Forty-five to fifty minutes later, they arrived at the place where she needed to drop off the man. But before he got out of the car, the man told her, “I will see you again. In a day when you need me the most.”

Linda felt a strange sensation. And when the man got out of the passenger’s side, he immediately disappeared.

The snow was so blinding, she thought maybe he was too close to the end road. Worried that maybe he slid down, Linda went out and ran around the car to look for him. She looked everywhere, but she discovered a supernatural thing instead.

She didn’t find even one footprint of the man from the 12 inches snow outside! Not even a single snowflake had been interrupted or disturbed in any way shape or form. And all of a sudden a powerful presence of warmth came over her. She knew then that she had had an angelic visitation. She had just met an angel!

Linda asked the LORD and began to understand.

“I became very aware of how tangible that power is for us. That God prepares that for us and that we have access to it as it is necessary and needed,” she said.

Today, Linda is encouraging Christians to “believe God for supernatural encounters of your own.” Not just in signs and wonders or meeting an angel, “But that we should have an open heart and open desire for whatever God would send us. So that we can walk in the fullness of everything that He’s provided for us.”

Watch Linda’s full testimony below and share to bless others!

For just $100 per month you can bring the gospel to 10,000 homes. Join us as media missionaries! GIVE NOW
VIEW COMMENTS
« God’s Word For You Today Prison In Iran Turns Into A Church After 2 Persecuted Christians Were Arrested »