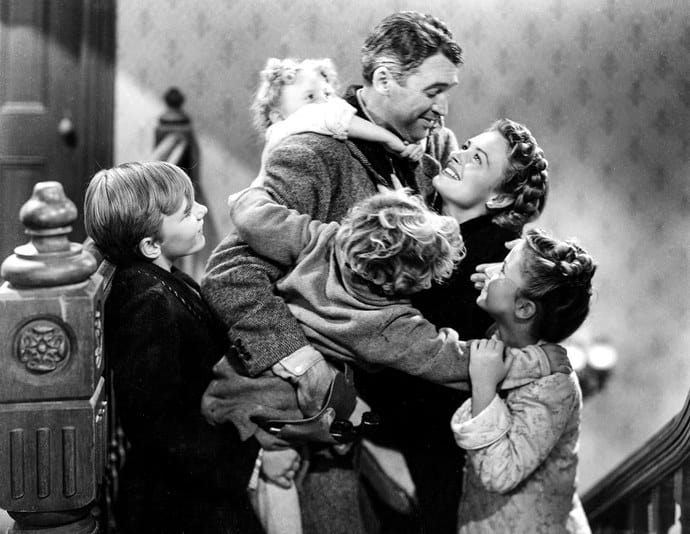 It’s hard to believe now, but Frank Capra’s masterpiece It’s a Wonderful Life, widely (and correctly) regarded as the greatest Christmas film ever made, was not a big success on its initial release. Reviews were lukewarm, audiences stayed away, and absurdly the film even ran into censorship problems due to the finale. The Hayes Code, in force in Hollywood at the time, demanded that the villain, Potter, be punished. He essentially gets away with his actions, but is isolated by them, absent from the triumphant finale. Capra argued this was enough, and got away with it by the skin of his teeth. He was absolutely right.

Needless to say, the film’s reputation grew over the ensuing decades, to its current status as beloved feel-good favourite. But whilst this film is the gold standard that defines the epithet “feel-good”, it is very, very important to note that this is far from the saccharine journey into sentimentality it is often made out to be. The triumphant ending does not come easily for protagonist George Bailey (James Stewart). It is definitely and most emphatically earned.

As the seemingly unsung Good Samaritan of the sleepy town of Bedford Falls, George despairs of ever fulfilling his long held dreams of exploring the world. Despite the presence of loving wife Mary (Donna Reed) and his children, after a crisis at work that could result in potential prosecution, one Christmas Eve George begins to wonder if the world might have been better if he had never been born. An angel is duly despatched from heaven to show him he is wrong, revealing the horrifying parallel universe that would have ensued had he not been present to perform his good deeds throughout the decades.

This is often described as the ultimate family friendly film, but personally I think this is not a film for children. Oh, it’s perfectly suitable for them, I grant you. But it is not a story they can properly appreciate, because only adults will understand the emotional nuances experienced by George Bailey, his outward goodness and compulsion to help people ever at odds with his growing resentment at the way his dreams are constantly thwarted. Moments such as the scene where he irrationally yells at his family brilliantly illustrate his inward turmoil.

And yet… The afore-mentioned triumphant finale is so utterly, utterly uplifting that it is nigh-on impossible to emerge from the cinema afterwards without feeling as though you are walking on air. It’s a Wonderful Life is a brilliantly written, acted and directed parable about the value of every human life. It is, by turns, comic, romantic, tragic, surreal, scary and ultimately deeply, deeply moving. Above all, it proclaims the empowering truth that no-one is a mistake, and how each of us has a unique destiny without which the very fabric of existence falls apart.

I only ever saw my late father cry at three films – Schindler’s List, Dead Poets Society and this one. I put it to you that only the pathologically hard-hearted can fail to be moved by It’s a Wonderful Life. Quite honestly I pity such people. I’m not ashamed to admit that, like my father, it brings a tear to my eye whenever I watch it. And yes – it is the greatest Christmas film ever made. I will brook no argument with that.