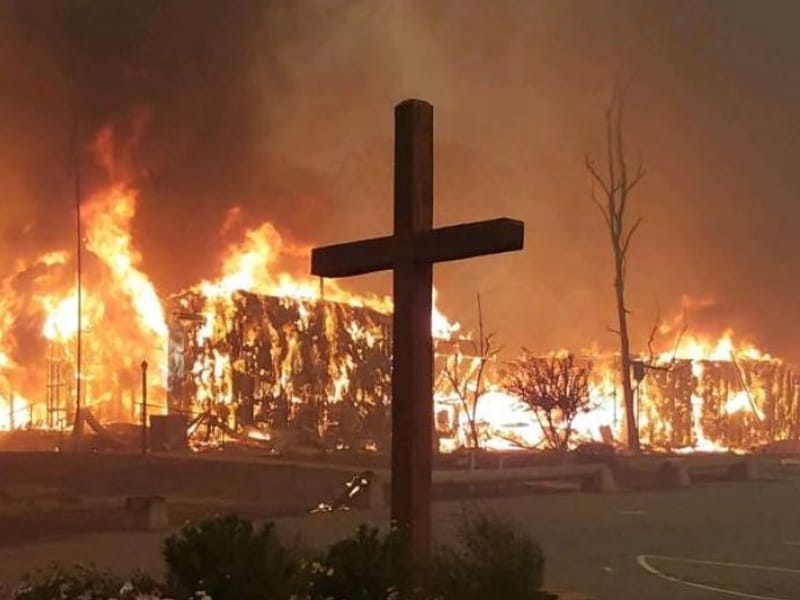 After Paradise, California was engulfed in flames of the wildfire, much of the town was reduced to ashes. But a miraculous thing happened. A wooden cross standing in a church’s parking lot was left untouched by flame.

A few days after the wildfire, Pastor Brandon Merrick, pastor of Our Savior Lutheran Church, posted a Facebook photo of the wooden cross that survived the fire.

For the pastor, the wooden cross was a reminder of “our one true hope” in a seemingly dark and hopeless world.

“For me, this picture is not just a heartbreaking reminder of what can happen to the things and people of this world,” Merrick wrote. “This is our one true hope in the midst of tragedy that cannot be destroyed by anything.”

The picture was snapped by Tyler Frank and Elizabeth Ozborn as they were escaping the fires. According to their statement, upon seeing the cross standing unscathed, they had faith they would survive the cataclysmic inferno.

“After being trapped on Pentz in gridlock traffic while completely surrounded by fire, we eventually found refuge in the parking lot of the Lutheran church. It was the first moment we felt safe and believed we would survive this horrific event,” Frank told Fox News. “We were grateful to be there.”

Pastor Brandon then explained the powerful message of the image of the unburnt cross.

“Everything that man builds with our hands is perishable, but what God does for us through the cross is imperishable and cannot be taken away or burned up,” Merrick said. “And that’s what I love about the picture.”

Evangelist Pastor Franklin Graham sees the wooden cross as a symbol of hope that remained standing among the ashes.

This article is written by Rhoda Cabrera.